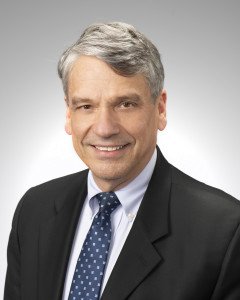 Charles E. Geyer, Jr., MD, is Chief Scientific Officer of the NSABP Foundation and chair of the NSABP Foundation Breast Cancer Committee. Dr. Geyer is co-director of the NCTN program at UPMC Hillman Cancer Center and has devoted most of his career on the design and conduct of multi-institutional, phase III clinical trials in breast cancer with a focus on the development of HER2 targeted therapies. He has served in several leadership positions for the NSABP, including vice-chair of the Breast Committee from 1999 until 2007, Associate Director of Medical Affairs from 2002 to 2006 and Director of Medical Affairs for NSABP from 2006 to 2011. He has served as an author on over 100 manuscripts in peer reviewed journals.

In 2008, Dr. Geyer was appointed as a founding Co-chair for the NCI Cancer Treatment Evaluation Program Breast Cancer Steering Committee and received a Director’s Award at the completion of his tenure in 2011.

He earned his bachelor’s and doctoral degrees from Texas Tech University in Lubbock, Texas and completed his internal medicine residency and medical oncology fellowship at Baylor College of Medicine Affiliated Hospitals in Houston, Texas.